“Why is my internet down?” | Analysis of a BGP leak causing a global outage

Explanation and analysis of today’s internet outage. What happened and what could’ve been done to prevent this? 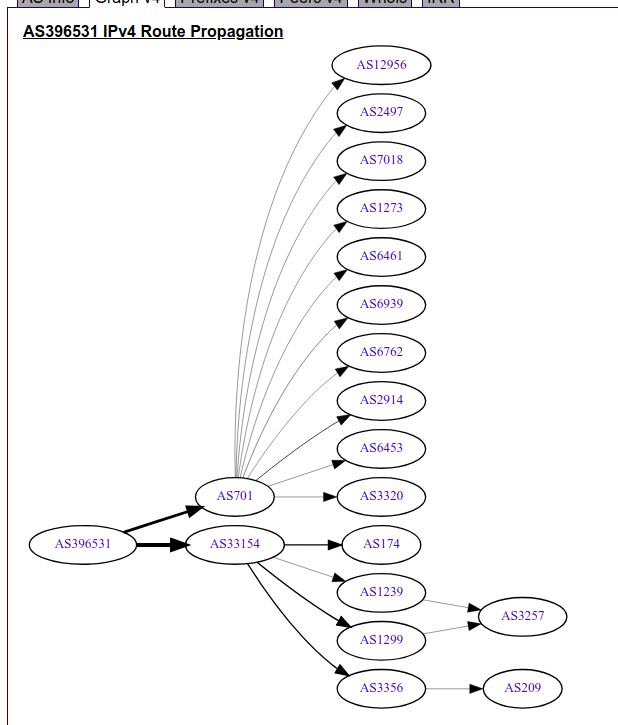 We can see that a $clueless_company (AS396531) gets internet connectivity through two providers (called upstreams in the network speak): Verizon (AS701) and DQE Communications (AS33154).

So what does “get connectivity” exactly entail? $clueless_company receives a bunch of routes – in fact, probably the whole internet routing table (which is around 800k routes at the moment) from both providers. Their router imports a routing table from both of these providers and then chooses best routes based on several factors.

Now, this communication/exchange of routes (which happens over a protocol called BGP) goes both sides. Basically, as a company, you want to have some IP space of your own too. In order for the world to be able to reach your IP space, you need to export routes for this IP space to your upstreams.

Thanks to the magic of routing, every router on the internet knows that in order to reach your IP space, they need to go either through Verizon or DQE. Great! 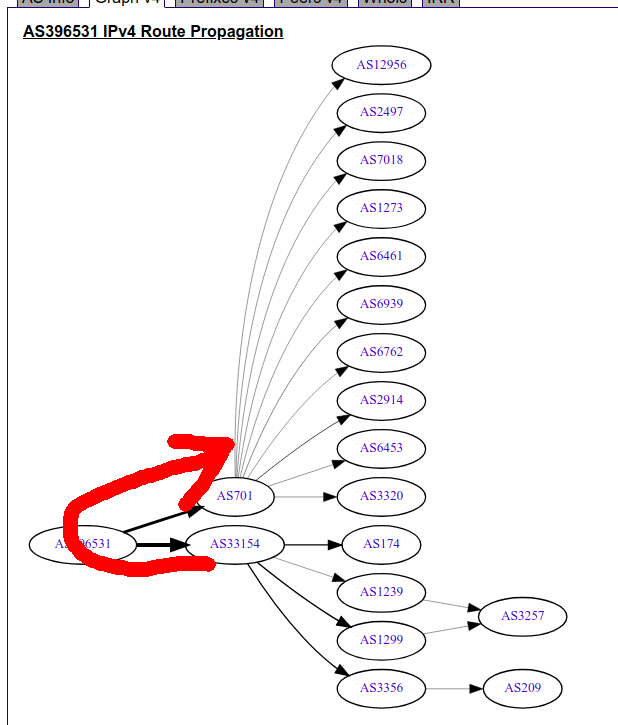 Illustration of the BGP leak (bgp.he.net)

To put it in words – they took everything DQE provided them and swiftly exported that to Verizon. Verizon decided to play an exhibitionist and propagated this to the rest of their peers – basically all other Tier 1 ISPs* (some of which accepted it – I know at least TATA, Cogent, Telia did) and their customers.

Which meant that half of the internet now learned that in order to reach networks like CloudFlare or OVH, they can go through Verizon -> $clueless_company -> DQE.

How routing to OVH looked like in Cogent’s Looking Glass. Notice the AS path:

Why did this have such a large impact?

Normally a leak like this would be a very regional thing. The leaked AS paths are usually much longer and routers generally prefer shorter ones. What happened is that DQE runs a routing optimizer, which generates longer prefixes.

Routers generally prefer longer prefixes with long AS paths over short prefixes with short AS paths (in other words, prefix length carries a larger priority when deciding which path is the best than AS path).

To be honest, I’m not even mad at the $clueless_company. They made a mistake, and mistakes happen. Especially when you’re a smaller company whose primary focus is not IT, this can be forgiven. Who is ultimately responsible is Verizon:

Can the routing optimizer be blamed?

No. A routing optimizer is a piece of software which does exactly what it is supposed to do. The problem is not with the technology, but rather with people operating networks.

*Tier 1 ISPs form the backbone of the internet. They’re very large service providers who freely exchange traffic between each other and sell IP transit to others.